This review introduced the basic principles and components of 3D bioprinting and potential research cases to summarize the future challenges in practical tissue engineering and medical applications. 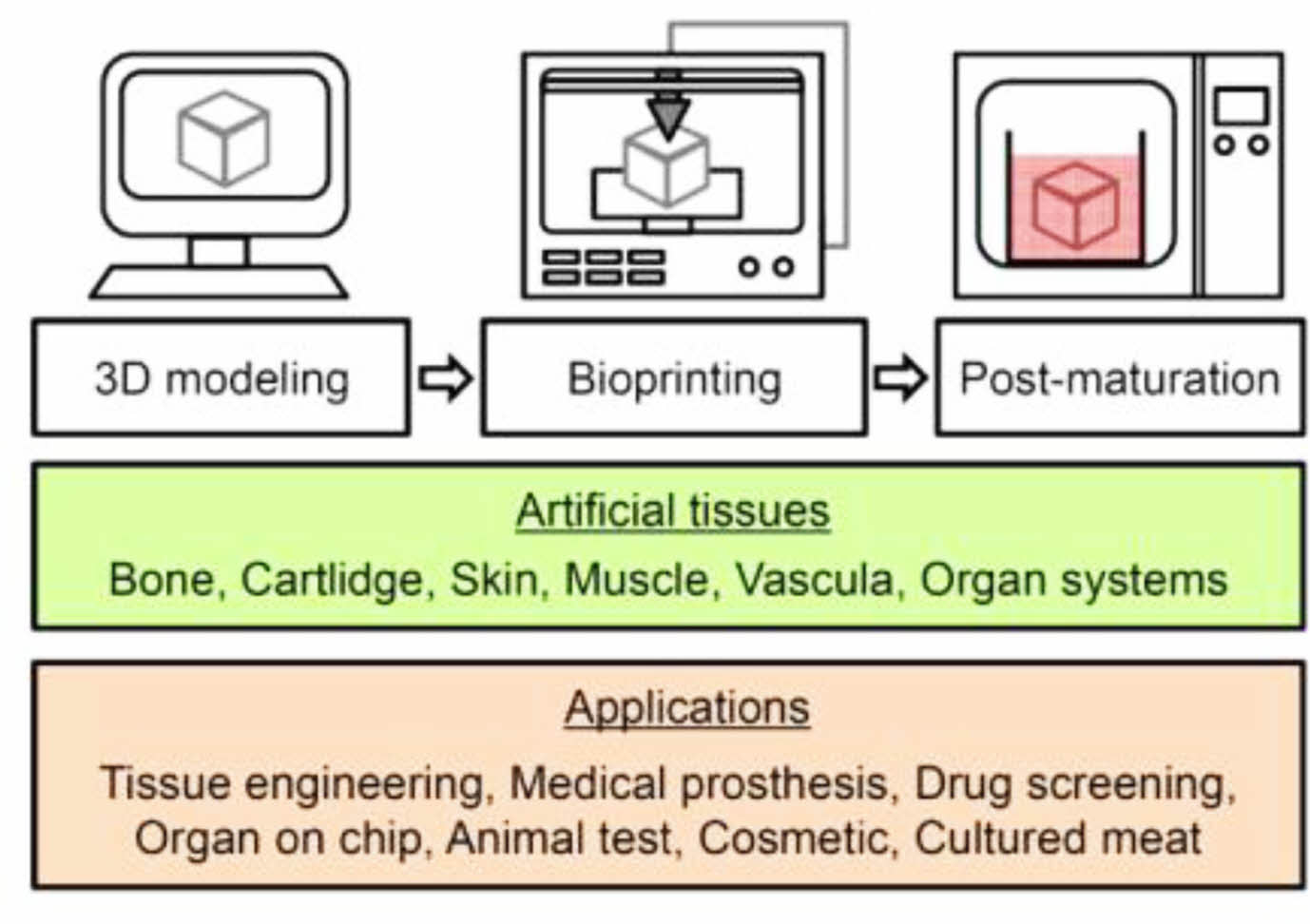 This paper was supported by Research Fund, Kumoh National Institute of Technology (2018104106).

The authors declare that there is no conflict of interest. 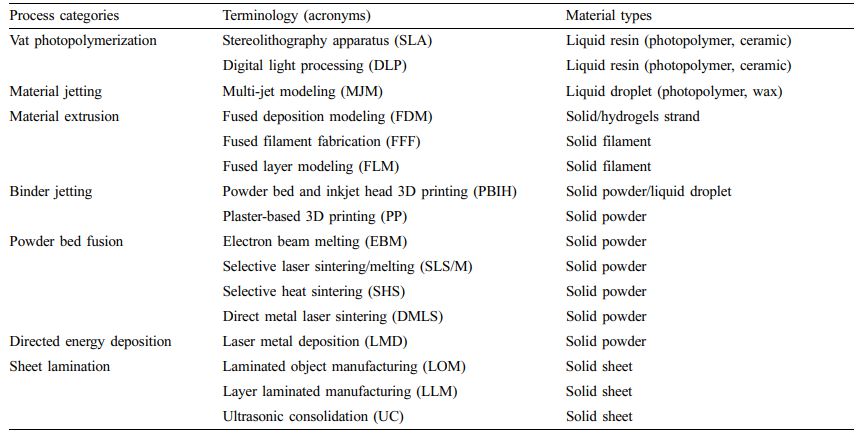 3D bioprinting consists of three stages: 3D modeling (pre-bioprinting), bioprinting, and postmaturation (post-bioprinting) (Figure 1).22-25 The three major types of 3D bioprinting are inkjet, laser-assisted, and extrusion processes. Inkjet bioprinters are primarily used for fast and large-scale products. The drop-on-demand inkjet allows materials to be deposited in exact amounts, minimizing cost and waste. Laser-assisted bioprinting provides high-resolution printing. Extrusion bioprinters build cells with hydrogels layer by layer. Among these, the extrusion bioprinter process is prominent for fabricating cell-laden 3D constructs.
3D Modeling and Toolpath Programming. The first stage of 3D bioprinting is the digital modeling of a 3D object. This section describes 3D modeling for printing objects from medical images of the organs or tissues to be bioprinted: CT data collected from magnetic resonance imaging (MRI), X-ray, and ultrasound. Most 3D image data are obtained from medical scans of a patient. The quality and usability of 3D models depend on the software and designer proficiency. The first step is segmenting the raw image data using image processing software. Then, image segmentation creates an STL format using a 3D CAD surface model. This surface model approximates the outer shape of the construct by using a triangular mesh. The surface model is then filled with repeating unit cells to generate a complete construct with an internal structure. Finally, the software generates a toolpath plan as a G-code file from a 3D model object. This software provides the motion path for the bioprinter to build up a bioink at the set time with the XYZ axis location.
Materials Used for Bioprinting. Bioinks are a liquid mixture of cells, substrates, and nutrients, used to produce engineered tissues via 3D printing. These inks are primarily composed of the cells that are used. The combination of cells and hydrogels is defined as a bioink.26,27 They must meet specific rheological, mechanical, biofunctional, and biocompatibility properties that ensure reproducibility and precise control over the fabricated constructs in automated 3D bioprinting.Biomaterials constituting bioink are divided into two types: natural and synthetic. Some natural biomaterials include substances present in the extracellular matrix (ECM) such as collagen, gelatin, fibrin, and hyaluronic acid and other natural biomaterials such as acellular dermal matrix, agarose, alginate, chitosan, cellulose, and silk fibroin (Tables 2 and 3). Natural materials have excellent biocompatibility. However, they have disadvantages, such as poor mechanical properties and slow gelation time. Unlike natural biomaterials, synthetic biomaterials have more controllable mechanical and chemical properties. Polyethylene glycol (PEG) and pluronics (poloxamers) are widely used as synthetic bioinks in 3D bioprinting. However, these materials lack adequate biocompatibility and biodegradability, limiting their application in 3D bioprinting. In light of this, modified natural bioinks such as gelatin methacrylate (GelMA), silk methacrylate (SilMA), and hyaluronic acid methacrylate (HAMA) have been developed to be a compromise between natural and synthetic bioinks. The physicochemical properties of hydrogel bioinks are more conducive for printability than those of general 3D printing materials. Considerations in the printability of bioinks include gelation, uniformity in filament diameter, maintenance of shape fidelity after printing but before crosslinking, printing pressure, nozzle diameter, and printing viscosity.
Bioprinting Parameters. This section describes the second stage of 3D bioprinting.22 When a toolpath plan is created from a 3D model object as a G-code file, specific cells are isolated and proliferated. The cells are then mixed with a particular liquid substance that provides oxygen and other nutrients for survival. In some processes, cells are encapsulated into cell spheroids with a diameter of 500 μm. Such cell aggregation does not require a scaffold and is required for placement in tubular tissue fusions for processes such as extrusion. In the second step of bioprinting, known as bioinks, is placed in a printer cartridge and 3D bioprinted on the motion path of the G-code file. When bioprinted pre-tissues are transferred to an incubator, cell-laden pre-tissues mature into tissues. Artificial organs, such as the liver and kidneys made with 3D bioprinting, have been shown to lack the important factors that affect the body: working blood vessels, tubules to collect urine, and the growth of billions of cells needed for these organs. Without these components, the body cannot obtain essential nutrients and oxygen from deep inside. All tissues in the body are naturally composed of different cell types. Many techniques for printing these cells differ in their ability to ensure the stability and viability of cells during manufacturing. Some methods used for the 3D bioprinting of cells are photolithography, magnetic 3D bioprinting, stereolithography, and direct cell extrusion.22
Postmaturation Process. 3D bioprinting requires a postmaturation stage to create a stable structure from biological tissues.28 If this process is not well maintained, the mechanical integrity and function of the 3D bioprinted object are at risk. Both mechanical and chemical stimuli are required to hold the object. These stimuli send signals to the cells to control tissue remodeling and growth. Recent developments in bioreactor technology have enabled rapid tissue maturation, tissue vascularization, and graft viability. Bioreactors provide convective nutrient transport, create a microgravity environment, change the pressure that forces a solution to flow through cells, and add compression for dynamic or static loading. Each type of bioreactor is ideal for different tissue types. For example, compression bioreactors are ideal for cartilage tissues.

Innovative research in tissue engineering using various 3D bioprinting techniques has been consistently challenging. The use of 3D bioprinting in tissue engineering to mimic various tissues could extend the limitations of traditional research concepts and provide versatile applications. 3D bioprinting allows the precise manipulation of biomaterials and living cells to reconstruct complex tissue substitutes for disease modeling and drug screening of organ-specific functions. In addition, bioprinted skin tissues are used in the cosmetic industry instead of in animal model experiments. Despite recent remarkable achievements in this field, challenges remain for printing instrument platforms, cells, and bioink materials used to build tissue models that have the cellular organization and structural complexity comparable to original tissues.
The technical challenges associated with 3D printing instrument platforms include the need for resolution, printing speed, biocompatibility, and scalability. Currently, only light-assisted bioprinters can achieve microscale resolution, which depends on the type of material used and the cellular concentration of the printing mixture. Higher print resolutions are still required to fabricate complex cell structures, such as capillaries and neural networks. A higher print speed remains a fundamental challenge for cell viability, especially for metabolically active cell types, such as liver and muscle cells. Also, the viability of these cells in the printing solution decreases with delayed printing time. The biocompatibility of the 3D printing instrument platform has been reported to be satisfactory in terms of cell viability. However, its impact on gene expression and functional aspects has rarely been studied. Depending on the type of bioprinter used, various mechanical and optical disturbances in the cells are involved. Further studies on the mechanical and optical effects of the bioprinting process will provide more insights into the biocompatibility of the 3D printing process.
The biomaterials used in 3D bioprinting also have significant limitations. The requirement for biomaterials to possess certain qualities reduces the number of materials viable for 3D bioprinting. Efforts have been made to develop composite bioinks for extrusion-based printing. Recently, decellularized ECMs have been studied to create printable biomaterials for extrusion-based and light-assisted bioprinting platforms. The dECM bioinks, which contain heterogeneous components of the native ECM, allow researchers to fabricate specific cell-laden constructs using a customized microenvironment, unlike commonly used highly purified forms of ECM components, such as gelatin and collagen bioinks. The native cellular ECM plays a vital role in regulating biological activities. This challenging approach has become more critical as we investigate the development of bioprinted biomimetic tissues.
Finally, scaling up bioprinted tissue constructs remains a challenge as the current applications are primarily based on small sample sizes.92 The continued fabrication of actual volume tissue models for clinical and commercial applications requires further studies to standardize printers, cells, bioink materials, and the printing process.